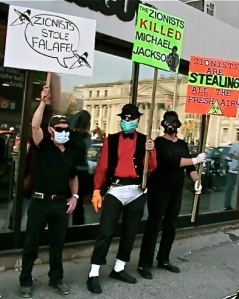 Like Hitler ranting in the bunker of his own cancer, Christopher Hitchens is rotting from the inside and the outside. Aww am I being mean? He’s a dying man. So he should get to run as many vile racist articles as he wants without ever being called on it. Cause he’s got cancer. And when you have cancer, you burn crosses and crib from Mein Kampf as much as you want, and you’re still a saint.

Hitchens has been adopted by some right wingers because he hates Muslims. They overlook his hatred for Christians, Jews and religious people in general. But his Antisemitism (yes I know he has some Jewish ancestry, so did Torquemada) has really gone over the top this time. His latest article could have been written by his buddy David Irving and is already a hit on antisemitic websites.

The title is “Israel’s Shabbos Guy”. As in…

“We are doing Israel’s dirty work for them. Aren’t you, as a gentile American taxpayer, tired of being Israel’s shabbos goy, and Sharon’s personal butt-monkey.”

That’s not from Hitchen’s article. That’s from Stormfront. But it’s hard to tell the difference anymore. Hitchens calls Rabbi Ovadya Yosef the “Sephardic Ayatollah”, because Jews from the Middle East are just like Muslims. (No racism to see here, move along.)

You can pick up his thesis at Stormfront or any Neo Nazi site. Judaism is a racist religion. Jews humiliate and abuse America. And how much is the poor gentile Shabbos goy supposed to take from those uppity kikes anyway? (Until it rounds them up and sticks them into gas chambers. Or gets some of those nice Palestinians to do it for them.)

“This is a national humiliation,” Christopher Hitchens screeches, because Israel didn’t immediately give in to Obama’s latest demand. That goddamned kike Netanyahu actually said he has to run it by his fucking cabinet. Who does he think he is anyway? The leader of a parliamentary democracy? When Obama tells him to do something, he should just jump and do it. Never mind that democracy stuff.

And all the Brownshirts chorus and agree. What is it with Nazis, wannabe Nazis and their deep sense of national humiliation”? Is it a small penis issue? If Netanyahu doesn’t fall to his knees and kiss Obama’s shiny boots, then it’s a national humiliation. Is it still a national humiliation if he waits a week before kissing his boots? Really, oh my. You can see why Christopher Hitchens spent so much time defending David Irving. Both those cunts are on the same page.

The mathematics of the situation must be evident even to the meanest intelligence. In order for any talk of a two-state outcome to be even slightly realistic, there needs to be territory on which the second state can be built

The only mystery is this: Why does the United States acquiesce so wretchedly in its own disgrace at the hands of a virtual client state?

Dude, did you not get the memo? The Jews run America. That’s why. That’s why those damned kikes and their client state can “disgrace” America by… building homes in their own nation’s capital. It’s a NATIONAL HUMILIATION. And the small penis jackboot squad will not stand for it!

HOW CAN WE ACCEPT THE HUMILIATION OF OTHER COUNTRIES NOT DOING WHAT WE SAY, WHEN WE TELL THEM TO DO IT? It’s a disgrace. A shocking disgrace. We’re slaves of those kikes, I tells ya.

A soft version of Rabbi Yosef’s contemptuous view of the gentiles is the old concept of the shabbos goy: the non-Jew who is paid a trifling fee to turn out the lights or turn on the stove, or whatever else is needful to get around the more annoying regulations of the Sabbath. How the old buzzard must cackle when he sees the gentiles actually volunteering a bribe to do the lowly work!

See, those damned kikes have turned gentiles into their Shabbos Goy. And the Aryans are the unwitting slaves of the cunning old Jew buzzards who secretly control everything. They’re even cackling some of their “Jewcackles (TM)”. The special cackles, that Jews only cackle when tricking gentiles. And running a worldwide conspiracy. And stealing all the world’s chocolate.

And somewhere Hitler’s bastard son is contemplating a plagiarism lawsuit against Christopher Hitchens.

This craven impotence will be noticed elsewhere, and by some very undesirable persons, and we will most certainly be made to regret it.

So it’s not a small penis, it’s impotence. I should have guessed. Poor Chris, impotent and writing diatribes about the damn Jews who took America’s potency away. Wait, wait is trying to write like Buddy Goebbels Jr, the only way Hitchens can get an erection anymore? By Jove, I think it is!

Is Jewbaiting Hitchen’s Viagra? Or is it just a substitute?

For now, though, the shame.

Yes, the shame. Hitchens wraps up his long career of supporting Marxism and terrorism with good old fashioned Anti-Semitism.

3 thoughts on “HEIL HITCHENS! Christopher Hitchens Jumps the Shark of his own Anti-Semitism”